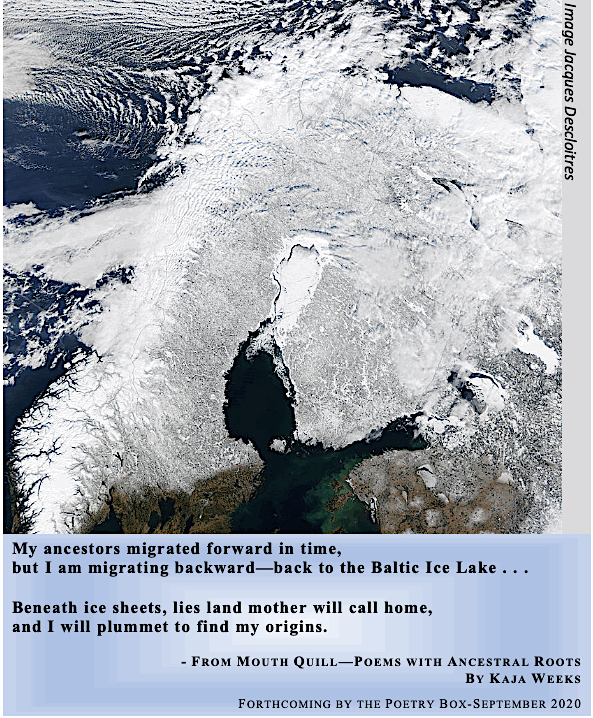 My chapbook of poetry is being published by The Poetry Box and is slated for release in September 2020! The lines below the photo are from the first poem, Ancestral Journey—Beneath Ice Sheets, which begins an imaginary exploration leading to the shores of Estonia. This poem is part of a trilogy, three poems that form the start, middle and end of the collection; the other two being Ancestral Journey—The Milky Way and Ancestral Journey—Helix.

I chose the satellite photo above to share this announcement as it so beautifully illustrates, by way of a (modern) snow line, the approximate glacier lines from 10,000 years ago! You can see Norway, Sweden, Finland, Estonia and even the small island of Saaremaa in this aerial image. Long ago, glacial ice covered all. When the melting began, I imagine the long journey of our Finnic ancestors, leaving the Urals:

Some will be left in river-bends,
some follow the reindeer north.

Some will look heavenward at traces of bird-flight,
some walk a milky star-path westward.

The term Mouth Quill (collection title and title of an individual poem) is found in runo verse (regilaul)—the word translates to suudesulg and refers to “a singer’s magical tool.” Some of the 21 poems are inspired by themes found in ancient runo verses (with the original runo verses listed in Notes), others by Estonian music, language and historic events. My writing weaves those world views into a life born and lived in America, with deep ancestral roots.

Under the Gum Tree is a quarterly literary arts magazine that publishes creative nonfiction and visual art. I am so pleased that my writing found a home in their fine publication. You can order print or digital copies from their website.

lived during the Cold War, and how anchovy (or, preferably, marinated sprat) open-faced sandwiches came to carry unique significance . . .

And how a refugee-mother’s own longing for a childhood fish (the Räim, a kind of Baltic herring) eventually became a mirror for her daughter’s personal longing . . .

My mother’s perch was lovingly made, the just-warm, salted, golden fillets arranged on a plate with twisted slices of lemon and fresh parsley sprigs.

Special Thanks to the IOTA Conference Online Course (2017), taught by American essayist, Sarah Einstein, for inspiring and leavening my creativity, leading to publication of both “My Childhood Fish” as well as the essay, “First Home.”

OVERTONE - An idea or quality that is suggested or not directly said.

OVERTONES - Musical sounds that resonate from a fundamental tone.